Sometimes, we see design contests on our website, we want to know more about, so also these three contests of Puur Gooisch, a dutch company, that cooks healthy and tasty meals.
Initially, a namefinding contest was started. After that, a logo contest and at last a flyer contest for a Christmas Menu. Who is Puur Gooisch and what do they do? Time to travel to Hilversum.

Puur Gooisch was founded by Merel and Eline; two entrepreneurs who bend over backwards to make a success of their company. After they met at the schoolyard, there appeared to be a click between them. Eline and Merel met more often. Whilst enjoying a latte macchiato and glass of mint tea, the idea of Puur Gooisch was born.

The idea was there but not the name. A friend of the entrepreneurs came up with crowdsite where the entrepreneurs started a namefinding contest. Merel and Eline were amazed by the many proposals and how quickly they were uploaded. The different perspectives that were used by the designers, were a surprise.

After the company name was chosen, a logo contest was started. In the first two days, the most favorite logos were submitted. After a evening of brainstorming, the winning logo was selected.

Puur Gooisch was founded by a lack of supply of healthy meals in the Gooi region. Puur Gooisch makes delicious, healthy meals, using seasonal products and if possible, these products are organic. As sustainability is of great importance, range meat and venision are used in the dishes. One dish per day is cooked. The dish can be ordered with either fish, meat or as a vegetarian dish. Meals are cooled after preparation in the shock freezer and delivered in a baking dish with instructions. The meal can be put in microwave or oven. As the meal is not frozen, structure and colour will remain and so are the vitamins.
Are you busy and have no time to cook? Would you like to eat low carb? Call Puur Gooisch.

Why did you choose Puur Gooisch as company name?

The name makes sense. We work with seasonal products and we try to bring out the taste of these products. We do not use huge amounts of additives or spices. We like the pure flavors. As we are located in the region Het Gooi and our dishes are delivered in this region we chose Puur Gooisch.

To bring our Christmas menu to the attention of the public, we started a flyer contest. These flyers were distributed during the Sinterklaas entry in Hilversum. 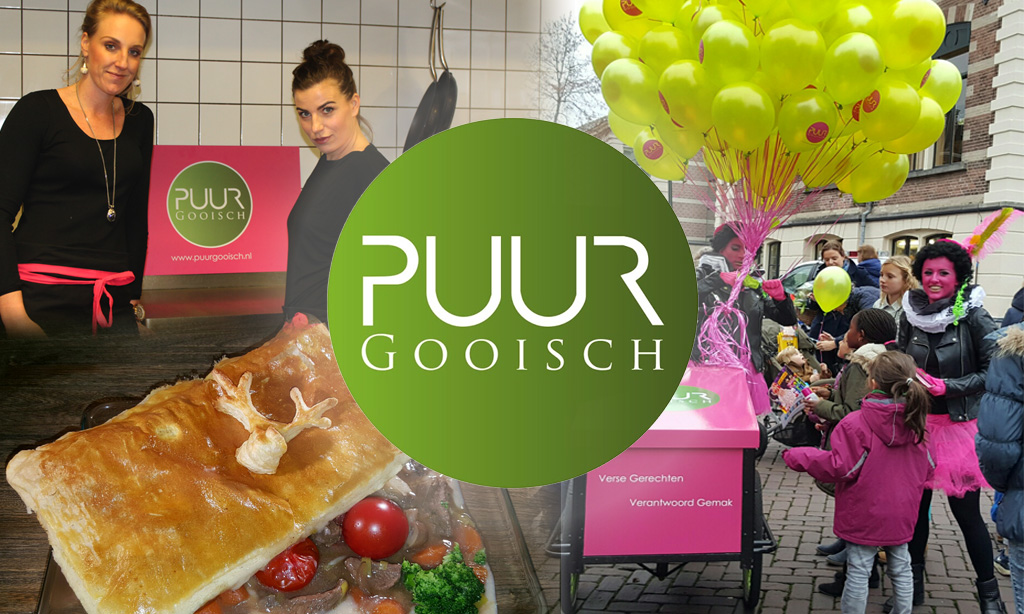