As one of the first designers, SBGV is for over more than 5 years active on our site. It is time to learn more about the designer who has won 133 design contests and became a rating form 9 out of 10 from her clients. We pick up the phone and fire off the 9 following questions….

3. What inspires you as a designer?
I get inspiration from everything I see around me, even from watching outside during a bus ride. I look at shops, people, shapes, colors, motifs, buildings, fences, flower beds and so on…
Holidays are also a good source of inspiration; crowded cities, the slope of the landscape, architecture, ornaments in churches / castles, murals, just to mention some examples. Sometimes inspiration is in simple things ….

4. How did you get to know Crowdsite?
During my studies a classmate tipped me. That has now been more than five years ago.

5. What do you do besides participating in contests on our website? Are you self-employed?
I work as a (freelance) graphic designer and I do each month volunteering; crafts with children between the ages of +/- four to twelve years.

6. Which contests appeal to you most?
Logo contests (wiht or without branding) appeal most to me as a logo is the ¨face¨ of the company and often decisive for the rest of the design/branding.

7. Do you have tips for other designers on our website?
A tip for other designers: make a nice (3D) presentation so that the client has an idea of how your design will look like when it is printed on paper, cardboard, etc. This looks professional, nice and neat.

8. What hobbies do you have besides designing?
As a hobby I do little projects. To mention a few things, I made lamps of large colored glass jars/vases with carbon filament light bulbs in it. I also made paintings with textured paint and jewelry with semiprecious stones. Very different. Usually such a project will take a several weeks to months and then I want to make something else.

9. The last question, what contest do you remember best and what was so special about it?
The contest that has stuck me most was the contest of the anniversary logo of the Dutch Marine Corps (350th anniversary). I was invited for the Corps Concert after winning the contest. I saw trams branded with my designed logo, which was great fun to watch. Beside that, I saw the logo extensively on flags, banners and T-shirts during the World Port Days in Rotterdam. 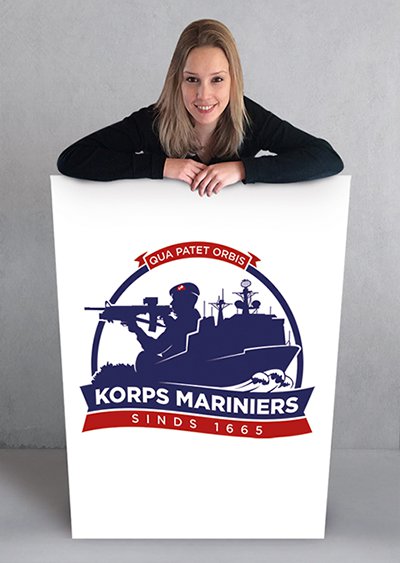